Disadvantages of using the adaptive mesh

has the following form:

are the minimum spatial steps along the axes

respectively, and the constant C is selected based on the physical parameters of the problem.

When applying adaptive partitioning of the computational domain, strong reduction of the spatial step along any direction in the vicinity of a single node should be avoided. This practice does not produce a tangible increase in the accuracy of computations in general but, according to equation (1), it significantly reduces the time step and hence increases the computational time.

. Applying the approximation to a standard template, we obtain the following formula:

. Assuming sufficient smoothness of the function u, on the basis of the Taylor formula, we obtain the following equalities:

Inserting equalities (3) and (4) into (2), we obtain the following formula:

It follows from formula (5) that, when

is approximated with first-order accuracy. At the same time, on the regular mesh

is approximated with second-order accuracy.

Advantages of using of the adaptive partitioning

Despite the fact that the difference operator is approximated with first-order accuracy in the general case, if, in practice,

do not differ significantly

in (5) will be quite small and will not have much impact on the accuracy of the approximation.

The need for using an adaptive mesh arises in cases when there is a need for a detailed discretization of small objects with complex shapes. The use of a uniform mesh in such cases leads to an excessive increase in the number of nodes, which makes it difficult to construct the model and to perform further computations on it.

With the help of the Frost 3D software package, we modeled the problem of heat conduction with phase transitions. The top view of the created model is demonstrated in Figure 1: 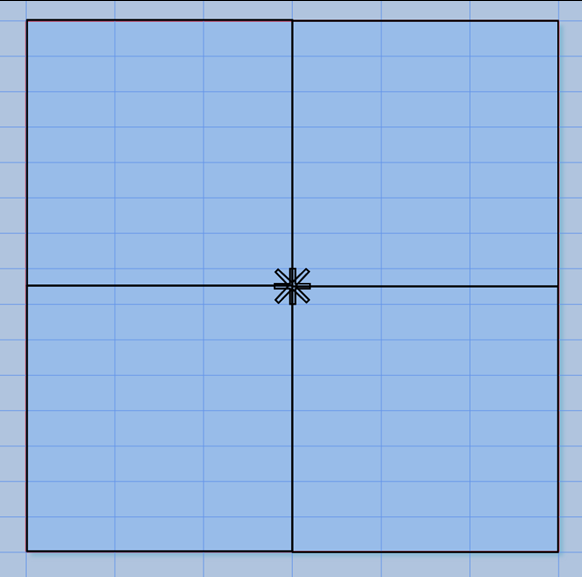 The computational domain contains of four parallelepipeds and a particularity in the form of an asterisk in the center. The width of the domain is 60 m and the height is 20 m. The physical parameters of the materials are represented in Table 1.

The phase transition temperature in all the materials is 0 oC. Zero heat flux is specified as a boundary condition at the boundaries of the computational domain.

For the above model, we construct a computational mesh using a uniform step along all three coordinate axes. The mesh step along each coordinate axis is 1.0 m. Consequently, the computational domain contains 78,141 nodes. As seen in Figure 2, the particularity in the center when using the uniform mesh is discretized in a very approximate fashion. 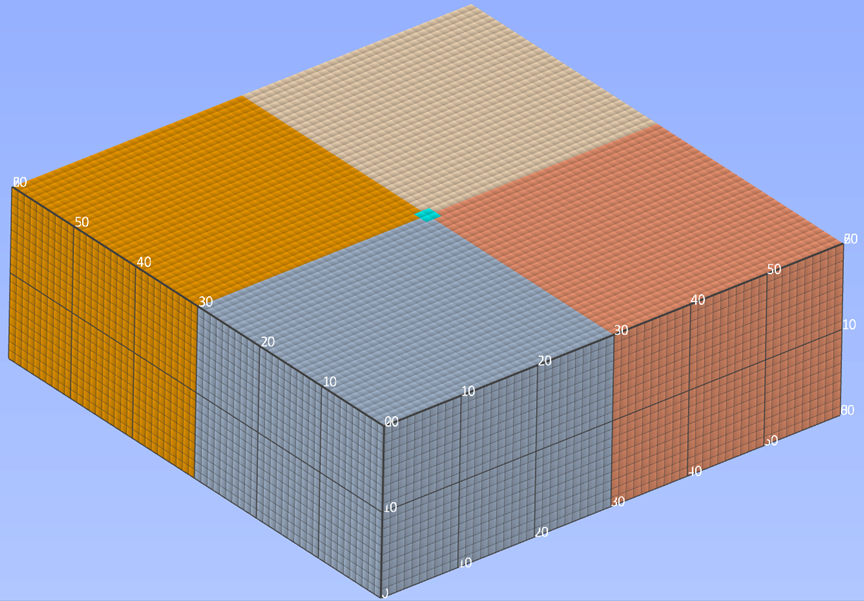 We now construct a computational mesh with approximately the same number of nodes using the adaptive step, with refinement in the center. The minimum step along the coordinate axes is 0.155 m and the maximum is 1.5 m. The entire domain contains 84,375 nodes. As seen in Figure 3, the complex object in the center is discretized much more accurately than in the case of the uniform mesh.

In order to verify the impact of rough discretization on the obtained result, we perform numerical computation and consider the dependence of temperature on time in the center of the computational domain for both the uniform and adaptive meshes (Figure 1).

The graphs below demonstrates the dependence of temperature (Kelvin) on time (days). 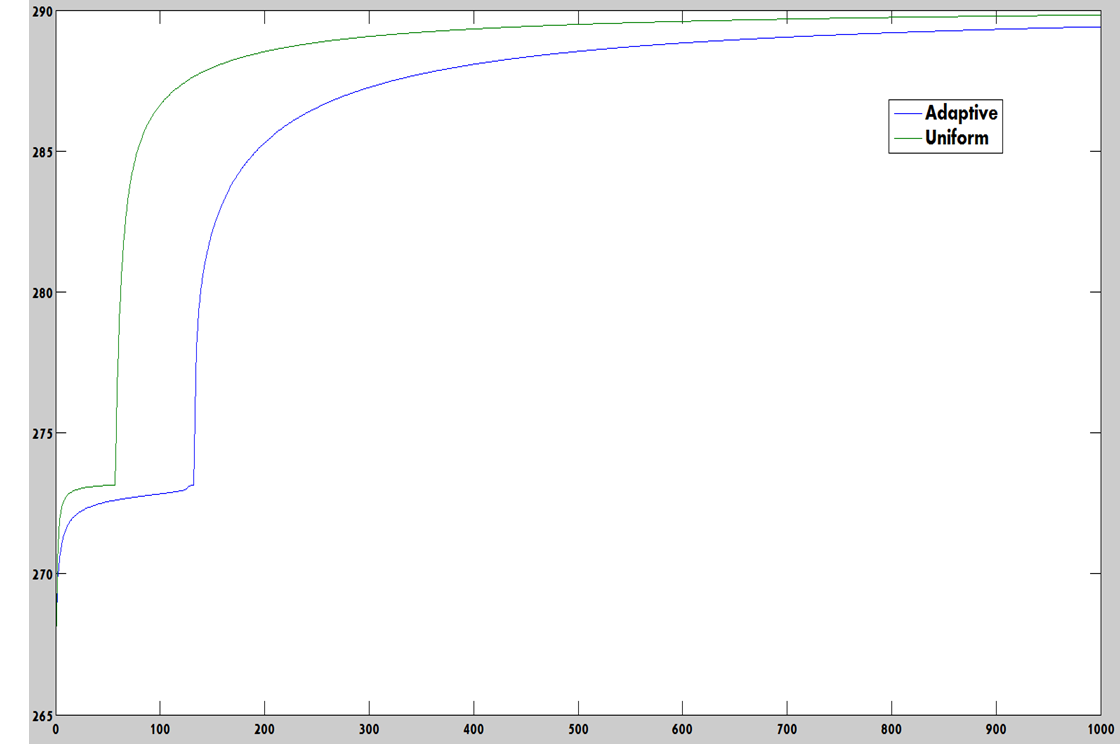 Graph 1 – Dependence of temperature on time (uniform and adaptive meshes)

Analyzing the graphs, we note that the results of the computations differ significantly. We can see that the phase transition occurred on the sixtieth day for the uniform spatial step, while the same phenomenon for the adaptive step occurs on the one-hundred-and-thirtieth day.

In example 2 we construct a similar model to that for Example 1, with the only difference being that there is no particularity in the center in the form of an asterisk. Similar to Example 1, we carry out two computations: one on the uniform mesh, and the second on the adaptive mesh. The steps of the meshes along the coordinate axes are equal to those used in Example 1. 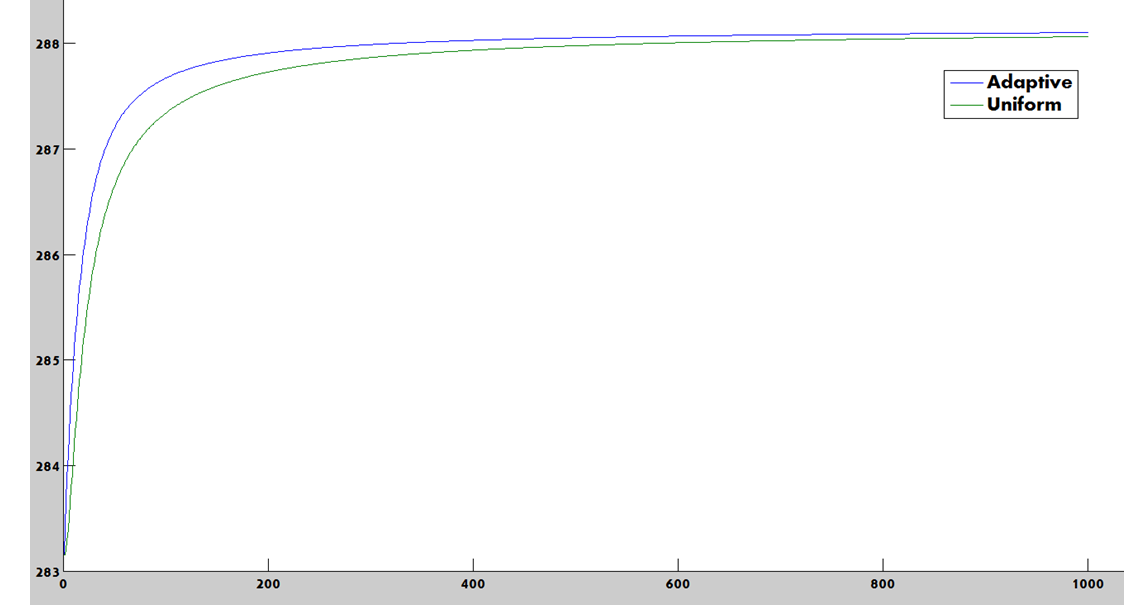 Graph 2 – Dependence of temperature on time (adaptive and uniform meshes)

Comparing the results of the computations, we find that the thermal fields do not differ so significantly as in Example 1. However, in some numerical schemes using the time step selection criterion described above, the application of the adaptive mesh significantly increases the computational time, which indicates the potential inexpediency of using the adaptive step.

Summing up the advantages and disadvantages of applying adaptive partitioning of the computational domain, we note that the application of this option makes sense when the domain contains elements whose geometric features are much smaller than the dimensions of the computational domain . In addition, the adaptive mesh can be used if the applied numerical method does not lose orders of approximation with irregular partitioning of the domain and also possesses unconditional stability when selecting the time step. In other cases, application of adaptive partitioning does not significantly improve the accuracy of computations, but still considerably increases computational time.